The History of Campwoods Grounds 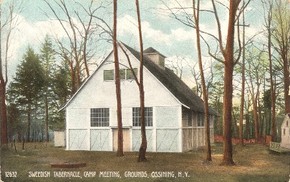 In the early 19th century, the Methodist congregations that followed Wesley's Methodist theology created a permanent home for the annual celebration of an evangelical expression of worship in the woods of Westchester. Wesley's evangelical teachings are rooted in a theology that looks to the original source of Christian faith — the New Testament.

From the beginning, the Methodist camp meeting was a social phenomenon as well as profound religious experience for the participants. The evangelical preaching was often thunderous and lasted through the entire day and carried on late into the night, as various preachers took turns exhorting the crowd to accept salvation.  CampWoods in Ossining proved to be an ideal location for these public religious affirmations. 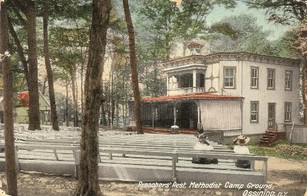 In 1854 a group of Swedish Methodists, most of whom were recent immigrants to New York City, organized their first independent camp meeting at CampWoods. Their participation proved to be the lifeblood of the Ossining camp meeting site during the second 50 years of its existence.

The pre-Civil War period of the camp meetings at CampWoods maintained its character as a religious jubilee in the countryside.  During the 1850's, the atmosphere on the boats, trains and wagons coming to the 10-day meetings in the woods of Ossining and during the religious retreats themselves were jubilant and celebratory. A typical camp meeting in August 1868 attracted an estimated 15,000 attendees. 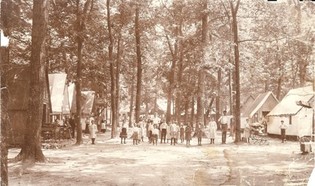 During the 1870's, regular attendees began to erect quasi-permanent structures on top of what were originally tents used for temporary housing and small outdoor kitchens. Frame cottages replaced these "tents" by the end of the century. By this time, many families remained in residence throughout the summer, as they prepared for the 10 days of camp meetings. Eventually, the cottages were equipped with electricity, running water and modern plumbing. Eventually, these families began leasing land from the Association and building their own summer cottages, and a permanent community began to take shape.

After World War II, more families winterized their cottages and by 1962 there were 28 year-round houses on the grounds. They formed a close-knit group, gathering for picnics and other social events. By the closing decades of the 1800s, the large-scale camp meetings of the 1860s had waned, and an organized neighborhood was beginning to develop.

The building of the more permanent cottages after the turn of the twentieth century and the decreasing attendance changed the character of the meetings. The 10 days of the camp meeting could be likened more to an intensive religious retreat than the dynamic camp meetings of the early 19th century. Residents would stay for several months, including those renting a room or a cot at the boarding houses. During the latter years of the Depression only the Swedish meetings continued. The Association Board and residents organized Sunday evening vesper services in lieu of the camp meetings held by groups other than the Swedish contingent.

In 1947, the New York State Legislature codifed the transfer of CampWoods land ownership to a new organization under the name "the Ossining Camp Meeting Association." During the 1950s more cottages were winterized and community developments were increasingly independent of the religious aims of the original community. The previous infrastructure supporting the large-scale annual meetings, for example, the religious tabernacle, the Brummel boarding house, and "The Restaurant" were eliminated. After 1994, the Swedish tabernacle, community dining hall and caretaker's cottage have been closed.

Although today's CampWoods grounds is a secular and more diverse community, the Ossining Camp Meeting Association continues to oversee the community, maintain the grounds, and preserve the Methodist history of the community.